Kansas Pheasant Hunting Numbers Are Up

With the upcoming Kansas pheasant hunts are approaching us quickly we have some great news to report about the upland hunting outlook here in Kansas. The spring weather has been favorable and it looks to be another ROCK SOLID year of pheasant and quail hunting.

We have had some heavy rain in comparison to most of South Dakota where they have experienced drought conditions for most of this spring and summer. These wet and cool conditions have been very favorable for habitat and nesting for the pheasants. Kansas should see another year of increased numbers of pheasants, with the Southwest corridor and in Kinsley Kansas areas that had some of the best results from the 2017 early season survey.

Kansas has traditionally been overlooked on their amazing upland hunting opportunities. With less pressure – more birds and a shorter distance to drive. Clients in states like Texas, Oklahoma, Missouri, Iowa, Nebraska, are able to spend more time in the field than in the truck or plane.

The 2017 season brings a lot of excitement here, we recently just finished an addition to the lodge, and can now accommodate up to 22 pheasant hunters. For those hunters now looking to bring in a large group of friends/family/co-workers or even those large corporate events, we have the room! Check out the new photos of the hunting lodge addition or take the virtual tour to check it out for yourself!

Another new addition to 10 Gauge Outfitters is the opportunity to hunt the early season in Kansas. Due to some requests of opening up the hunting lodge in October – 10 Gauge has acquired hunting land that falls under the preserve status.  This means now instead of driving for South Dakota pheasants, you can save yourself 8-10 hours in the truck. Hunting some of the best in the Midwest and as a bonus you can hunt quail as well.

We look forward to a great and wonderful year here at 10 Gauge Outfitters. To book your next hunt please fill out our contact form, email or give me a call. I am more than willing to help answer all your questions about your next pheasant hunting adventure here in Kansas. 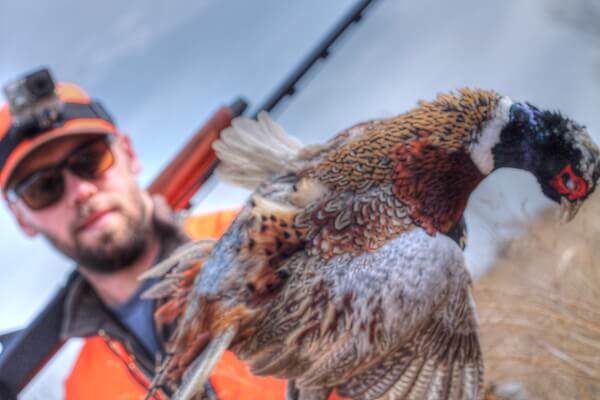 Pheasant hunter showing off his pheasant in Kansas

“Upland hunters in Kansas harvested about 422,000 roosters in the 2016-17 season, up from 2015-16 season,” reports Jeff Prendergast, Small Game Specialist with the KWPT. “Hunter success was relatively high, and hunter numbers remain below average.

That brings us to nesting and production. Rainfall throughout spring was heavy, providing ample cover for nesting and brood rearing. Habitat across the state is generally good to great.

For the traveling hunter he adds the following insights. Northwest and Southwest traditionally have the highest pheasant densities, but Southwest had the highest crow survey this year. The Northwest appears to be still recovering from losses during the drought.”

“Related to that recovery, the statewide pheasant crow index has returned above pre-drought averages, and North-Central and South-Central are both relatively above the long-term average. The Kansas pheasant initiative is ongoing in focus areas in Northwest and North-Central Kansas. The recovery from drought conditions is currently the largest factor influencing our rapidly increasing pheasant populations.”

Nesting success is going to be key to this fall’s hunt, and Travis Runia ventured some insights.

“Almost 143,000 hunters walked for South Dakota pheasants in 2016, with about 80,000 of them hailing from out-of-state. Nonresident hunter numbers have dropped in South Dakota since the recent heydays of the mid- to late- 2000s, when upwards of 100,000 visitors hunted annually.

Many wheat fields failed due to drought conditions. This will reduce the amount of nesting cover provide by this cereal crop.  As of late June, 57% of South Dakota was under moderate drought or worse, with 31% suffering from severe drought or worse.  The drought is intensifying during the brood-rearing period which can cause reduced chick survival.”