Advantages of a Hunter Orange Cap

Blaze Orange on Your Pheasant Hunt

A Filson Tin Cloth pheasant hunting hat give hunters a distinguished look in the field, it is not as useful as blaze orange hat when hunting. The sight of a pheasant falling from the sky after the shotguns fire is usually a satisfying site. However, that can quickly change when the pheasant’s feet are extended down. This means it will likely hit the ground running. The fear of losing a wounded bird creeps in the hunter’s mind. There are many reasons why hunters should wear blaze orange when on a pheasant hunt.

As the hunter approaches the spot of the downed pheasant, they can remove that blaze orange hat and drop it where the bird landed. If dogs are involved they may already be on the scent. However, the hunter who made the shot should start walking in a tight winding circle around that orange cap. Slowly increasing the circle with each lap. 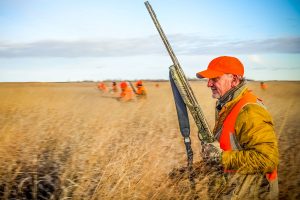 In thick Kansas CRP fields are dense. Becoming slightly disoriented when searching for a dead or wounded bird can happen very easily. Remembering the exact location of where the bird fell originally slips away. A blaze orange pheasant hunting hat will serve as a beacon to mark that critical landing zone. If the bird isn’t found after spiraling around that cap out to 30 yards or so, start over. Sometimes a wounded, wily bird will be hunkering down in thick cover just a few feet from where it landed.