After crushing the first five clay targets, I thought to myself that I’m going to need to miss some in order to determine how well these Winchester hunting shells work. Well, alas, that didn’t take too long. The new Winchester AA TrAAcker shotshells are designed to help pheasant hunters better understand their misses. The patented wads spin to keep a true line in the middle of the shooter’s shot pattern. Effectively, the wad of each shotshell provides the shooter an idea of why he or she missed a the target. 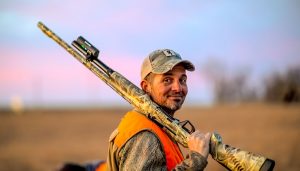 I shot one box of the “Black TrAAcker” shells on a sunny day at a local sporting clays range recently. The flying wad was not hard to pick up on missed shots. However, if using these, I would recommend the partner try to determine the flight of the wad. If the shooter tries to hunt for it, it could lead to two critical shotgunning errors:

The performance of the Winchester hunting shells seemed as one would expect from the Winchester AA line: excellent. They cycled well, and I had no jams. I broke targets at my usual rate. I was able, with the help of my partner, to understand clearly when I shot behind a target, or low and so on. My second box of shells to complete the 50 round course were not the TrAAckers. I began to wish I had another box of this Winchester product on a couple of challenging stations.

Are they worth the extra money?

Winchester claims they will only run about a dollar or so more than a regular box of target shells. I purchased mine at an outdoor retail store for about $12. If able to find them and purchase them in bulk or at a price within a dollar or so of your normal price for target shells, then I say go for it. They are well-made, and they do as advertised. The evidence is clear in the sky on missed clays—at least most of the time.

Getting in Shape for Your Kansas Pheasant Hunt

Slowing Down for the Youth!