For years, some deer hunters in Kansas have lamented the restriction on centerfire rifle caliber for Kansas deer hunting. However, the regulations have changed so that any centerfire round is usable for deer hunting. The 2013 Kansas Deer brochure states that the legal equipment for firearms includes the following. Centerfire rifles and handguns that are not fully automatic, while using only hard-cast solid lead, soft point, hollow point, or other expanding bullets; shotguns using only slugs. 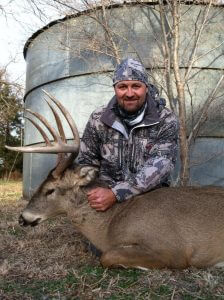 That’s it. No bullet diameter regulations. No ft.-lbs. regulations. Just simply use a centerfire cartridge as specified. Previously, deer hunters in Kansas were required to use a centerfire round that was larger than .23 inches. And shotgun hunters had to use 20 gauges or larger; now, all shotguns with slugs are legal. Some hunters from nearby states who travel to Kansas to hunt deer have been frustrated by the old regulation, especially considering popular calibers such as the .223 Remington were allowed in their home state but not in Kansas. Well, not anymore.

Typically, hunters are evenly divided on this issue. Some have argued that the reason behind that old Kansas regulation was a lethality concern. That is, some think too many deer would be wounded and not harvested properly, and as such, larger, more lethal calibers should be used. Others suggest that shot selection, range and placement are the most important factors and that if a hunter takes a good, ethical shot, then a .223, for example, will take care of business.

Is this a good thing for Kansas? It can be a great thing. After all, it allows more hunters more options, taking away confusing regulations. It provides more commonalities between Kansas and most states nearby. Squelching the anti-hunting movement’s complaint that “those .223 ARs are not for deer hunting!” However, as always, hunters should know their range. They should know the capabilities of their equipment. Load those centerfire rifles, and enjoy practicing for the 2013 Kansas deer hunting season.

Getting in Shape for Your Kansas Pheasant Hunt