EMPORIA — The Kansas Department of Wildlife, Parks and Tourism (KDWPT) is launching a new quail restoration initiative aimed at making a difference in declining bobwhite quail populations at a landscape level. The state initiative includes the designation of two large quail management focal areas and as much as $500,000 of KDWPT wildlife fee funds over five years. Additional funding and support are being provided by the National Wild Turkey Federation, Quail and Upland Wildlife Federation, Quail Forever, Safari Club International, Kansas Wildlife Federation, and The Nature Conservancy. Primary objectives are a 50 percent increase in bobwhite populations and a 5 percent increase in suitable quail habitat in each focus area.

“Bobwhite populations in eastern Kansas have declined by 50 percent or more in the past three decades or so and even more across other parts of its range nationally,” says Jim Pitman. “Biologists have associated the declines primarily with land use changes and resultant habitat loss, and they have joined forces across the nation as the National Bobwhite Technical Committee to counter the trend at a landscape scale with the habitat-based NBCI.” 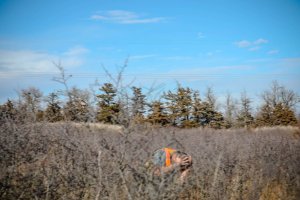 KDWPT has targeted two regional bobwhite “focal areas” totaling nearly 310,000 acres for restoration over a five-year period. The focal-area strategy reflects the national consensus that working at larger landscape levels rather than on small, scattered projects provides the best opportunity to save the bird. Typically, focal areas are anchored by a large tract of public or private land as a core, and efforts are expanded outward to other interested adjacent landowners.

Kansas’ 194,911-acre northern focal area includes parts of Lyon, Wabaunsee, Coffey, and Osage counties and has a bobwhite habitat management potential of “high,” as rated in the national initiative. The core public lands are the 9,407-acre Melvern Wildlife Area and the 562-acre Lyon State Fishing Lake and Wildlife Area.

The 113,711-acre southern focal area includes parts of Labette and Neosho counties. Its potential for bobwhite habitat management is rated “medium,” but Pitman adds that the additional sources of funding and potential partners available to assist the effort there make it a worthwhile target. Additionally, the public land centerpieces include the new Grand Osage Wildlife Area (formerly the Kansas Army Ammunition Plant) where approximately 9,000 acres will be managed by KDWPT when all the agreements are in place. The southern focal area also includes the 1,320-acre Big Hill Wildlife Area.

KDWPT will assist eligible landowners with enrollment in the appropriate U.S. Department of Agriculture (USDA) cost-share programs and then cover the landowner share of approved practices with non-federal money.

The state has issued a list of acceptable quail-friendly practices, but each landowner project must have the approval of the appropriate KDWPT district biologist to receive the additional non-federal cost share. Bobwhite-friendly practices that are not eligible or accepted into USDA programs will be covered solely with non-federal dollars. Consequently, the landowners will be reimbursed for 100 percent of the estimated average costs for all approved quail-friendly work that they implement within each focus area.

Article and photo courtesy of KDWPT: