Calm-assertive leadership to pheasant dog training, of course, that a hunter is not yelling or losing control. It means that no matter what happens, the hunter—the leader—is in a relaxed state of mind, voice and body.

Plastic food wraps and I don’t get along. I’m talking about the kind that people wrap over a bowl of leftovers before sticking it in the refrigerator. I got in an argument once with a cantankerous box of said wrap that was refusing to cut properly. The poor box came out on the wrong end of the argument, and I was “banned” from using the plastic wrap. Now this may sound silly, but have you heard of a guy arguing with his gun dog? Losing composure about a severely poor design to a box cutter is one thing, but losing control in the field with a gun dog is another. Imagine what it would sound like if a hunter’s angry shouts and comments at his hunting dog were recorded and played back. Considering that dogs don’t use and don’t understand language, this would make any dog owner sound juvenile. 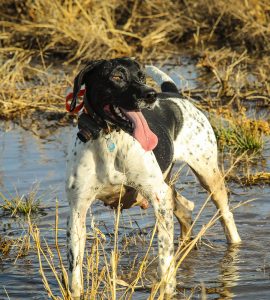 The Dog Whisperer, Cesar Millan, reiterates in his books and television show that people must be “calm-assertive” leaders for their dogs. While not known for training hunting dogs, he has worked with or rehabbed thousands of dogs. Being assertive requires a hunter to be firm in his or her commands and not give in to inappropriate behavior. It means a stable, commanding voice that has no hints of doubt or indecisiveness in it.

Doing this, Millan suggests, will make the dog want to follow its owner. Out of control behavior is viewed as a weak leader in the dog world and in the human world. So, it follows then, that all of the pheasant dog training gives, he should be in the attitude and spirit of calm-assertiveness. Maintaining control of yourself is the first step to controlling your hunting dog. After all, you don’t want to be banned from the plastic food wrap—or worse yet—from pheasant hunting with your buddies.