PRATT – Following the outstanding 2010-2011 pheasant hunting season, spring surveys revealed good Kansas pheasant nesting populations going into the 2011 nesting season. From April 25-May 15, the Kansas Department of Wildlife, Parks and Tourism (KDWPT) conducted its annual spring survey of pheasants. As the mating season approaches, roosters increase crowing, and KDWP staff drive established routes to listen for the birds. Pheasant routes are set up along 20-mile transects, with at least 2 miles between each of 11 stops. At stops, observers listen for two minutes and count all the audible two-note crows heard from male pheasants. The average number of crows per stop across each management region is calculated and used to assess how population numbers have changed from previous years.

Observers start listening at the first stop along each route beginning 45 minutes before sunrise and progressing along the route until all 11 stops have been surveyed. Noise interference is taken into consideration, and data is censored if the observer feels noise is inhibiting their ability to count crows. Data from this survey, combined with the summer brood count survey in August and a rural mail carrier survey, helps determine the outlook for the fall pheasant hunting season.

All 62 established routes were surveyed this year, and an average of 20.5 crows were counted per station, an apparent increase of 17 percent from 2010, which is not considered statistically different. 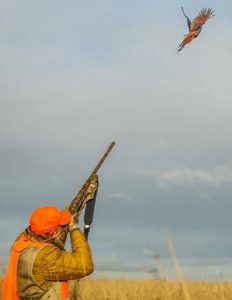 The Kansas pheasant nesting survey results can represent two important life stages for pheasant populations in Kansas. Changes in spring survey indices can reflect over-winter survival for a population. Often, winter can be a bottleneck for some upland game populations. However, in western Kansas, winters are often much more mild than more northern latitudes, and pheasant survival is usually high throughout much of the state. When this is the case, spring surveys can also reflect the reproductive success of the previous breeding season.

In the 2010 breeding season, pheasant productivity was high across most of the state, which carried over to the 2011 Pheasant Crow Count because of a fairly mild winter for Kansas’ best pheasant range. The south central and northeastern parts of the state showed declines, likely due to poor productivity last summer as a result of less than ideal weather conditions in those areas. Northeast Kansas has also had some severe winters recently, which has suppressed populations.

Overall, western Kansas has one of the strongest pheasant breeding populations in its history this year, which is reflected by the extremely high crow counts for 2011. However, extreme drought has created unfavorable breeding season conditions across most of southwestern and south central Kansas. Thus, the 2011 fall pheasant population will likely be down substantially from last fall in those areas. Conditions appear to have been much more favorable for productivity in other regions of the state, but it is still too early to make accurate predictions about the fall population in those areas.

Across Kansas’ pheasant range, those areas with good interspersion of grassland and cropland showed the highest densities of pheasants again this spring. Many of the hens in these regions use green wheat for nesting, and the condition of the wheat crop usually has a strong influence on pheasant productivity. The wheat crop was generally poor across western Kansas this year, which meant less vertical structure for nest concealment and an early harvest date. The early harvest likely increased direct mortality of nests and young from farm equipment. Additionally, the ongoing drought in that region will also negatively affect chick survival because dry conditions reduce the availability of insects, which are the primary food source for those developing young.

The following map — which must be viewed in color shows breeding pheasant densities across the state in the spring of 2011.

To download the 2011 Pheasant Crowing Survey — which includes this map as well as other useful charts — go to www.kdwpt.state.ks.us, then click “Hunting/Upland-Birds/Ring-Necked-Pheasant.”