Requirements for Pheasant Hunting in Kansas

The great Paul Harvey announced during his radio commentary what color of apparel, is the most visible by others in the outdoors. The results? Hot pink. The radio icon chuckled as he knew most probably wouldn’t buy into such color from the blaze orange while hunting.

While many athletes wear hot pink for breast cancer awareness and other noble causes, the hunting industry doesn’t seem likely to move in that direction since blaze orange is already a popular and effective color. In all seriousness, hunters shouldn’t underestimate what the simple act of wearing blaze orange while hunting can do for safety in the field. 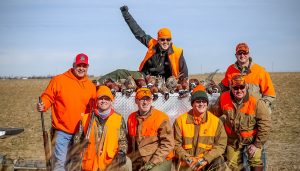 When Kansas pheasant hunting his fall, be sure that your vest has plenty of blaze orange on both the front and the back of your vest. If you like to wear a sling pack or backpack to carry extra gear, avoid wearing tan or camouflage packs since they cover up and make you less visible. Wearing a hunter orange cap can make a hunter more visible especially in areas that are hilly or have any kind of elevation changes. That bright orange headwear will make hunters more visible, for example, to another hunting party as the first party crests the hillside.

While less than half of the states require hunter orange for pheasant hunters, it is widely recommended by state wildlife agencies. Think of your apparel as an extension of gun handling safety. It certainly can’t hurt anything. When others are swinging shotguns on birds near you, do you want to blend in with the natural landscape, or do you want to stand out while hunting?

Slowing Down for the Youth!